Our Patient Ambassadors for Strides 2022 received life-changing care at Hamilton General Hospital and the Regional Rehabilitation Centre. We hope their stories inspire you to register and fundraise!


Regulating the Rhythm of Her Heart

It would come without warning. She could feel her heart pounding like crazy and she would feel exhausted. “The episodes started in 2018,” recalls Victoria Malcolm from Brantford. “I’ve always been an extremely active person, but then the episodes would come out of the blue and I would need to lay down because I was so tired. Sometimes it would last 12 hours or more.” 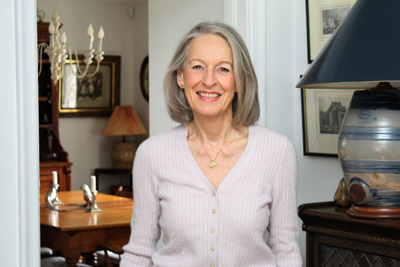 Victoria’s family physician referred her to Hamilton General Hospital, where she was placed under the care of Dr. Jeff Healey. It was discovered that Victoria was suffering from atrial fibrillation, which is an irregular and rapid heart rhythm that can come and go, seemingly at random.

“The scariest part of having atrial fibrillation is its unpredictability. Nothing specific seemed to be provoking the episodes and you could never tell how long it would last.”

If untreated, atrial fibrillation can potentially lead to blood clots and stroke. Victoria was put on a blood-thinning medication and her condition was closely monitored.

“I was good for a few months, then I had several episodes in February of 2020,” explains Victoria. “That’s when I was referred to Dr. Guy Amit, an electrophysiologist at The General.”

Victoria underwent cryoablation – a minimally invasive procedure designed to disable the areas of the heart that are causing the abnormal rhythm. A thin, flexible catheter is used to locate and freeze the tissues in these specific areas. 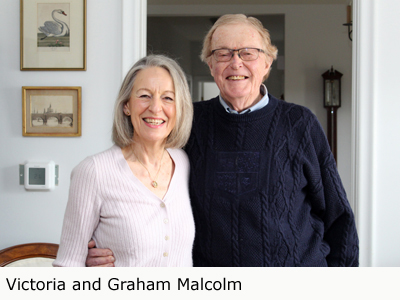 Inflammation caused by the procedure caused some chest pain afterwards, but medication helped to reduce the inflammation and discomfort.

“The entire staff in the Electrophysiology Lab was fantastic,” says Victoria. “I was initially worried about having the procedure, but they put me at ease. They were so knowledgeable and reassuring.”

Today, Victoria is back to her active lifestyle again.

“I’m so happy that I can do all the things I love doing, like biking, swimming, skiing and yoga. I can’t say enough good things about the care I received at Hamilton General Hospital.”

Recovering from a Stroke at Age 34 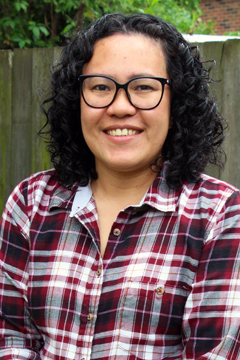 Iris-Kim Maquiling from Hamilton will never forget the day she had a stroke in November 2021. She had a nagging headache and the left side of her forehead was feeling numb. Hoping that a good rest would help, Iris went to bed early.

“When I awoke the next morning, I couldn’t open my eyes, move my body or speak – no matter how hard my brain tried,” recalls Iris.

She eventually regained some control of her body and was able to walk with the assistance of her husband. However, Iris felt numb and weak throughout the right side of her body. Her husband took her to the Emergency Department at Juravinski Hospital, which is close to their home.

After a physician determined that she was probably having a stroke, Iris was transferred to Hamilton General Hospital by ambulance. A CT scan confirmed that it was a rare type of stroke caused by a clot in her left carotid artery.

“I was only 34 years old. I have four kids and I was worried about how the stroke would affect my ability to be a good mother.”

Iris underwent an endovascular procedure to remove the clot. The surgical team succeeded in removing most of the blockage, but some of it broke off and travelled to her brain. A second procedure was required to remove it before any damage was caused.

“After the surgery, I began working with therapists to retrain my brain,” explains Iris. “Because of aphasia, I couldn’t speak, I couldn’t read or write, and I couldn’t even remember my kids’ names.”

Iris spent a week recovering at The General before being transferred to the Regional Rehabilitation Centre. She worked with a physiotherapist and an occupational therapist to help her walk and feed herself again.

“A recreational therapist introduced painting sessions to my rehabilitation,” says Iris. “Even though I couldn’t feel every stroke of the brush, it gave me confidence as I worked to overcome my physical deficits.”

Because she is bilingual, two different speech pathologists worked with her – one to help her speak English and another to help her speak Filipino. She was thankful for the ability to access such specialized and multicultural services.

Iris was discharged on December 17, in time to enjoy the holiday season with her family. 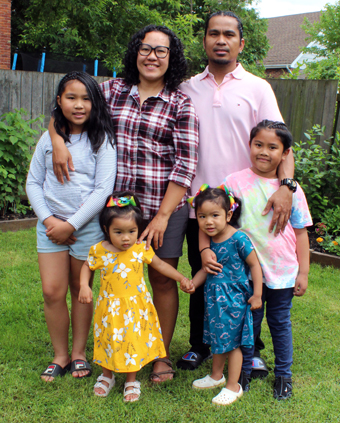 “Returning home was important to my mental health, which I began to realize was so important to my well-being,” she says. “I continued having appointments with my therapists through Zoom, and they gave me exercises I could do at home to continue strengthening my body.”

The right half of her body is still numb, so she must be careful not to injure herself on that side – she might not even feel it if she suffered a severe cut. This whole experience has forced her to slow down and look after herself.

As her recovery continues, Iris keeps making gains that improve her quality of life. She is back to gardening, which is one of her passions, and she is able to sing with her children again.

“I’m grateful to the health care professionals who provided amazing care at Hamilton General Hospital and the Regional Rehabilitation Centre. Their compassion during every stage of my stroke and recovery has truly touched my heart. Even when I felt overwhelmed, they always helped me move forward to the next step.”

A New Normal after Breaking His Spine 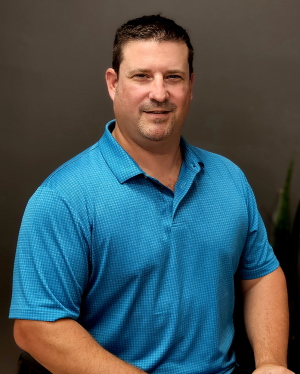 Brian Campbell was looking forward to celebrating the holidays with his family in November 2017, but a sudden fall while hanging Christmas lights changed his life forever. “As soon as I hit the ground, my legs went white hot, then there was no feeling after that,” recalls Brian.

An ambulance immediately rushed Brian to Hamilton General Hospital where he was informed that the impact resulted in a fractured spine. “I remember the doctor saying clearly, ‘there is a real chance that you might not walk,’” says Brian. “I remember that striking deep in my brain.”

Brian awoke in a daze following a four-hour surgery. His vertebrae had been fused together and pinned in place to provide structural support as it healed. “It wasn’t until about a week into recovery that the lead nurse came in and wrote ‘paraplegic’ on the white board.” Brian’s thoughts went to his two young children, as he had to figure out how to tell them their daddy could no longer walk.

Brian stayed at Hamilton General Hospital for several weeks until he started physical rehabilitation at the Regional Rehabilitation Centre. He engaged in daily weight training to gain back the strength in his upper body until he was discharged in February.

He then began outpatient rehabilitation where he attempted to walk as much as possible with the assistance of staff members, leg braces, and walkers. This continued three times a week for eight months. “You have to be positive, especially in the hospital. I was conscious of that factor. I have to keep moving forward and can’t dwell on it.”

Brian persevered through this intense physical journey with the support of his family and the staff at Hamilton General Hospital and the Regional Rehabilitation Centre. “There are many people that go above and beyond your expectation of what health care workers are.”

Following the conclusion of his outpatient rehabilitation, Brian faced conflicting emotions. He felt a sense of accomplishment for completing the program, but also felt a loss of direction. For Brian, returning to work as production manager at Hart House Theatre was a priority. “It was really important for me to get back to as much of what I was doing before my accident as possible.”

Brian has resumed creating elaborate theatrical productions, adapting his work to his new mobility level by replacing physical aspects of the job with more strategic responsibilities. Accessibility measures such as door openers and ramps have also been implemented at his workplace.

Although Brian’s injury was very serious, he is thankful to the staff at Hamilton General Hospital and the Regional Rehabilitation Centre for providing him with exceptional care during a difficult time. “These people are amazing and provide such an extended level of care. I wouldn’t be in a positive place in my life without them.”