Thanks to everyone who attended our Halloween Fundraiser!! Because of you all this was our best event yet! We raised a total of $11,545.00. Stay tuned for our next fundraiser details this winter!!

On June 29th 2001, a beautiful light entered into our lives and her name is Aleksa McWhirter.

Aleksa was generous, kind, intelligent, witty, funny and so much more. She was very fun to be around and had the ability to brighten up any mood.  She loved snowboarding, music, she played guitar, piano and loved to sing. She loved to have fun. She had many friends who all cared for her as much as she cared for them!  Aleksa was always very respectful to others and knew how to make others feel liked and loved. She was a very special young lady! Along with all of these traits, Aleksa was known to be very “Sassy” always using her wit to have a smart come back that would always keep you on your toes. This was apparent from a very young age and she soon was given the nick name “Sassy”. This name stuck with her, for her entire life!

In early September 2015, Aleksa went to her grade 9 orientation. Aleksa and all of her friends were very excited for this day!  They had talked about starting high school all summer and were all looking forward to this new challenge! During the orientation day, Aleksa started to get really dizzy and she did not feel well. When picking her up after work, we noticed that her the left side of her face was drooping almost like it was paralysed. We went to the emergency and spent most of the night there where she was given a CT scan and looked at by the on duty physician and then went home with some antibiotics. The next morning, we brought her to her pediatrician and after examining her, he immediately booked us in to see a neurologist at McMaster Children’s Hospital in Hamilton, Ontario.  The next couple days were spent going through test after test to try to diagnose what was happening to our little “Sassy-Girl”.

On Sept 4th 2015, we found out that Aleksa had what was known as DIPG (Diffuse intrinsic Pontine Glioma) a rare and aggressive form of brain cancer. Because of its location and the way it grows, it was in-operable. There is very little research on this cancer since it only affects approximately 30 kids in Canada each year.  This is at the core of the reason for this page -- to help raise funds to help find a cure to change these statistics. So far, every diagnosed case to date has been fatal.

As parents whose daughter recently passed away from the terrible disease, it is difficult to think back at what it did to her but we feel it is important for people to understand how bad DIPG really is.  We think that if we could rate the mental agony that these children endure, it would significantly outweigh the fact that only a small number of children are diagnosed each year. SOMETHING HAS TO BE DONE!

The tumor is located in the brain stem and affects the area of the brain called the Pons. This area of the brain is responsible for all of the body’s major functions such as breathing, blood pressure, heart rate to name a few.  As the tumor grows, it slowly puts pressure on the nerves controlling the body’s functions and slowly takes away each of these functions. Through the entire time, the patients still maintain their cognitive functions leaving them trapped in their failing bodies.

Aleksa lost her mobility, her hearing, her speech. She only had the ability to move her left arm and her head and we were only able to communicate with here by typing on a keyboard connected to her smartphone and tablet. She was slowly losing her vision before she passed. As sad as we feel about her passing, we know that she had no quality of life and we know that she was finally at peace and not suffering anymore.  We could not then and never want to imagine a day that she would lose her vision too.

This cancer is rare but believe us, it does happen! It can happen to anyone! Does anyone remember Neil Armstrong, the famous US astronaut that was recorded as the first man to walk on the moon in 1969. Well, his daughter died of DIPG in 1962. Seven years later, people can walk on the moon but still, no cure for DIPG! 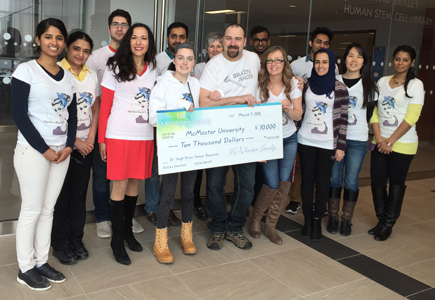 Even after this traumatic news, Sassy was determined more than ever to win this battle. Her determination and perseverance through everything over her 10 month battle puts me in awe!  We still remember like yesterday, the day that she had the MRI that would give measurements of exactly where the tumor was for targeting the radiation. During this MRI, they had to make a solid plastic mold of her head and face. This mold when hardened was made to pin down her entire head to the MRI table so that she would not move. When they put the mold over her head and locked it in place, I was so scared that she was going to be afraid and asked her if she was ok. She raised her hand and gave me a thumbs up sign and when she did it, you could tell she was doing it with that Sassy little attitude she always had!  She was and still is, absolutely inspiring to us! Throughout her entire journey she kept this strength and actually guided us with her positive attitude and resolve!

2016 was a very dry summer with very little rain.  The day of Aleksa’s celebration of life, her friends were going to release some balloons for her just after a light rain shower.  Before the release, everyone noticed the appearance of a very bright double rainbow.

A few days later and over 700kms away, the day of Aleksa’s burial, there was another very bright double rainbow spanning the cemetery where Aleksa was recently laid to rest.

A couple months later, we received Aleksa’s memorial stone at her burial site in Timmins, Ont. Most of Aleksa’s close friends wanted to visit that weekend to see her resting place and on their way in to town, they were all witness to another magnificent rainbow – each of them at different locations. At the same time, my wife’s parents witnessed a rainbow over the lake at the front of their home in Quebec.    There were also other rainbows throughout the summer that seemed to appear at times that really made us think. It’s because of all of this that we chose the name – Rainbows and Stars Aleksa’s Journey.

Please help raise money to find a cure for DIPG other children’s lives depend on it!

Find a Participant or Team: