Welcome to the Wish Heart Fund

The Wish❤Heart Fund was created in memory of a very special baby, Super Jack Wishart. He spent most of his life on the inpatient ward 3B2 at McMaster Children’s Hospital, fighting acute lymphoblastic leukemia.

In his honour, our mission is to provide quality items of comfort and care for children and families fighting cancer. With your donations, we have been able to purchase 6 sleeper chairs (that fold out into beds for parents) and a Leckey rocking chair for the inpatient ward. We are also funding the COG KidsCare app for two years for all pediatric oncology patients. We run fundraisers throughout the year for the purchase of gift cards, books, Bravery Beads and art supplies.

Your generosity makes all this possible. Thank you to all of our donors for your support! 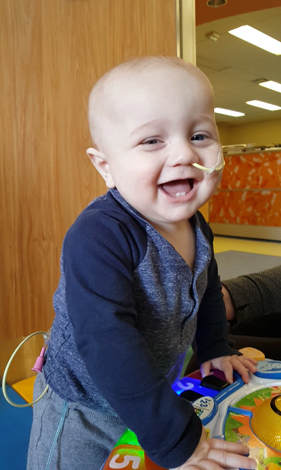 Jack was diagnosed with Acute Lymphoblastic Leukemia when he was 5 months old. He was a strong, independent and healthy baby who loved to play and was always smiling. His diagnosis was a shock, as it is for many families in this situation. Jack had 1.5 million white blood cells when he was diagnosed - he should have had less than 10,000. The doctors at Mac caught it right away. They made life saving decisions that day that we are eternally grateful for. But we were told that the cancer was so strong that Jack only had a 1 in 5 chance of survival.

Undaunted, Jack fought like a champion. After a very scary few days where Jack almost died, he rallied and began to fight. He had three rounds of chemo at Mac, and a round of biomeds to finally kill the last cancer cells. Because he was so young, we lived in the hospital around the clock with him. McMaster Children’s Hospital became our home. Jack learned to crawl, tried his first finger foods and took his very first steps while living in the inpatient ward of 3B2.

Our little Super Jack didn’t know he was sick, because he was too young to understand. He got his chemo while stealing the hearts of doctors and nurses. He bounced in his jolly jumper right by the nurses station and squealed happily to demand attention. Other oncology patients came to laugh and giggle while they watched the happy baby bounce around.

Jack had a very strong cancer that was relentless.  He needed a bone marrow transplant in order to fully irradicate the cancer from his body. We had to take him to Sick Kids for this procedure, with plans to come home to Mac when we were done. We were petrified, but optimistic.  Jack was a fighter and had beaten the odds so far.

The transplant was successful, however Jack caught a cold before his new immune system could start working.  And eventually, that cold turned into pneumonia.We never made it home to Mac. Jack passed away when he was 13 months old on May 7th, 2017 surrounded by love.

Jack brought joy to everyone who crossed his path. He was a beacon of light, and the Wish Heart Fund has been created by his family to continue his legacy and bring some comfort to children and families dealing with cancer.

Find a Participant or Team: